It’s Wednesday morning and we are driving out of Keene at 8 am toward the Lake  Champlain Ferry at Essex NY for the crossing to Charlotte, VT.  This is no highway!  We are twisting through quaint country roads, slowing through small towns, passing green meadows, farmland, grazing cows in pastures, and small towns with historic buildings. As we approach Exxex, NY we start to see signage directing us to the ferry.

I live on an Island, and although there is a bridge to the peninsula, the main route on and off the Island is by taking the very large ferry that holds 202 cars and 2,000 people.  When I realized that the best way to get from Keene, NY to Stowe, VT was a ferry over Lake Champlain I was so excited!

We are only 10 minutes early for the 9 am sailing from Essex, and I’m a little nervous that we won’t get a spot…oh was I wrong.  The ferry terminal is tiny and we are the first in line. 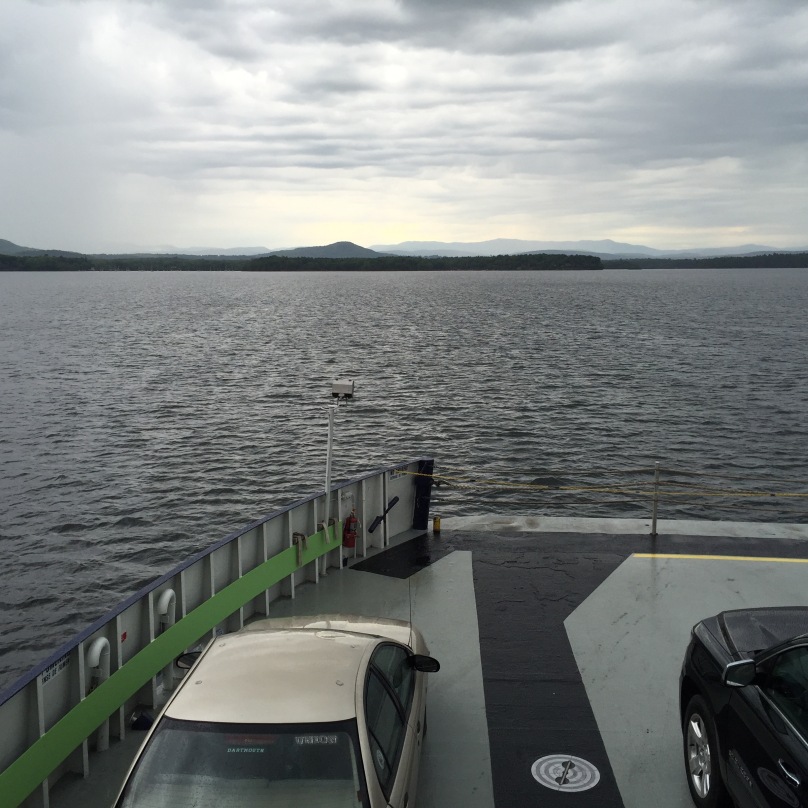 The Ferry holds about 40 cars for the 35 minute crossing of Lake Champlain.  On our crossing there were only about 20 cars.  We tried to spot “Champy” during the voyage; he is the mysterious monster that lives in these waters!  While we had a beautiful morning, we never did spot that elusive water creature.  By the mid part of our crossing, the sun was obscured by clouds and it started to lightly rain.

As we drove through VT, we were taking in the “feel” of Vermont, which was definitely different from New York.  Where New York felt “historic” Vermont had a real natural vibe.  We drove past the Ben & Jerry Factory on our way to Stowe, winding up Highway 108.  That is when it starts to pour rain.

It’s Wednesday.  Plan A is to hike a 7 mile round trip loop up the Long Trail and back down the Haselton Trail which is part of one of the ski slopes at the Stowe Mt Resort.  This will leave us time time to see the sights in Stowe and drive 1.5 hrs to Franconia, NH where we have hotel reservations.

But it is pouring so we consider plan B:  Let’s not hike, but rather, let’s drive up the toll road.  From the toll road the hike to the summit is 1.2 miles, 2.4 miles round trip.  We have rain gear, and we figure this is a good compromise.  However when we get to the bottom of the toll road, we are “highly discouraged” from driving up to the summit.  I think the guy at the toll booth actually said, “Are you serious?  You cannot actually be thinking about going up there.  The wind gusts are 40 mph and there is very little visibility.”

So we come up with plan C.  It was based on the (false) hope that the storm had not yet reached Mount Washington (NH).  We would drive quickly, take the Cog Railway up to the summit and back, and then return to Mount Mansfield the next day.  In the back of our minds, we would then miss out on the 4 mile hike up Mount Washington, but return to do the 7 mile loop up Mount Mansfield.  So it was with much dismay that when we stop for lunch about an hour out of Stowe, we looked back on sunny skies to the west.

We arrive at the Mount Washington Cog Railway station at about 2:30 and make the last train up the mountain for the day (whew!).  The weather is chilly, but not freezing, however the weather at the top is downright bad.  The summit is encapsulated within a cloud, with 10 feet of visibility, raining and or blowing snow, and blowing wind at about 40 mph with gusts of 73 mph (that’s hurricane wind people!).  But the train goes up on schedule.  In fact, that little cog railway goes up in all kinds of bad weather.

The base of the railway 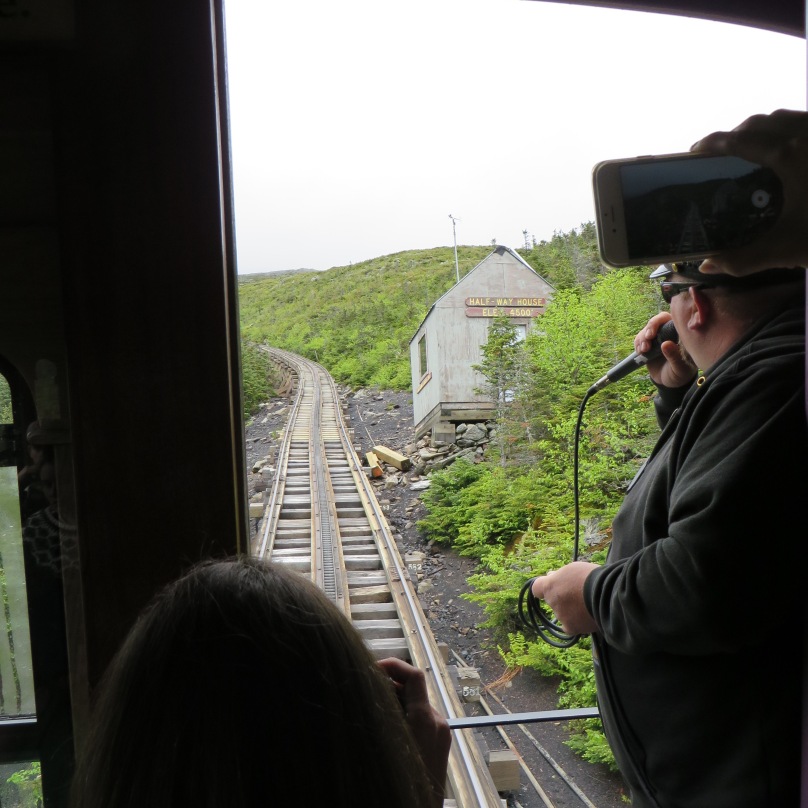 almost to the top

It has to be one of the more unique railway rides I have ever been on.

And the top was absolutely the worst weather I have ever been in.  I have to admit that being in such bad weather was fun.  Jason got blown back several times, I nearly lost my footing in the wind.  The visibility was terrible.  We only had about an hour to screw around, and found that you could only be out in the cold for 15 minutes before you went running into one of the gift shops (of which there were 3).  Don’t miss the museum on the bottom level of the main building.

Mount Washington is Ranked 18th of the State HP’s, at 6,288 ft above sea level.  There are several routes up to the summit including car, cog railway, and hiking.   Our original plan was to hike the Ammonoosuc Ravine Trail that would have been a distance of about 4.5 miles and an elevation gain of 3,800 ft.  However, I cannot report on this trail.  There are many cairns along the way to help you in inclement weather, which happens often on this mountain.

Once off the mountain, we made our way to the Hotel.  We found a lovely spot for dinner and a nice beer, and discussed the next day’s hike.  Our hope was to drive back to VT and re-introduce Plan A.  That way, we would only be missing one hike.  So the next morning we got up early, and drove back to the Stowe Mountain resort.  Our plan was to park at the Gondola, and hike up the highway to the Long Trail at the 108 and start the hike.  In the parking lot, we had two separate encounters with resort employees and what ensued was total confusion.  One employee loved the Haselton trail and tells us it will only take an hour and a half.  The other advised the Long Trail to avoid the annoying Zip Line along the ski slopes, and then says we really don’t have enough time to hike the trail (??).  I am really not sure how this happened, but we ended up driving up the toll road and only hiking about 3 miles.  So we missed 2 hikes of the trip.

The toll road is basically the “Cat” track that leads up the mountain during ski season.  It is a dirt road through forests, breaking out onto bare ski slopes at times, and then plunging back into the forest.  Near the top, as the trees are diminishing in size, we ran into the spot where the Haselton trail intersects the road, and finding parking there, we parked.  We walked up to the “nose” from that parking lot.  Mount Mansfield is a ridge with a few prominent peaks resembling the face of a man lying on his back.  There is a forehead, nose, chin and adam’s apple.  The toll road ends at the Nose.  The Chin is the actual high point.  So we hiked to the Chin.  This trail is mostly marked with white blazes painted on rocks.  The vegetation is fragile and they keep you off the grasses to avoid damage.  As you hop from rock to rock you slowly make your way to the Chin where the views are amazing.

looking from the Nose to the Chin 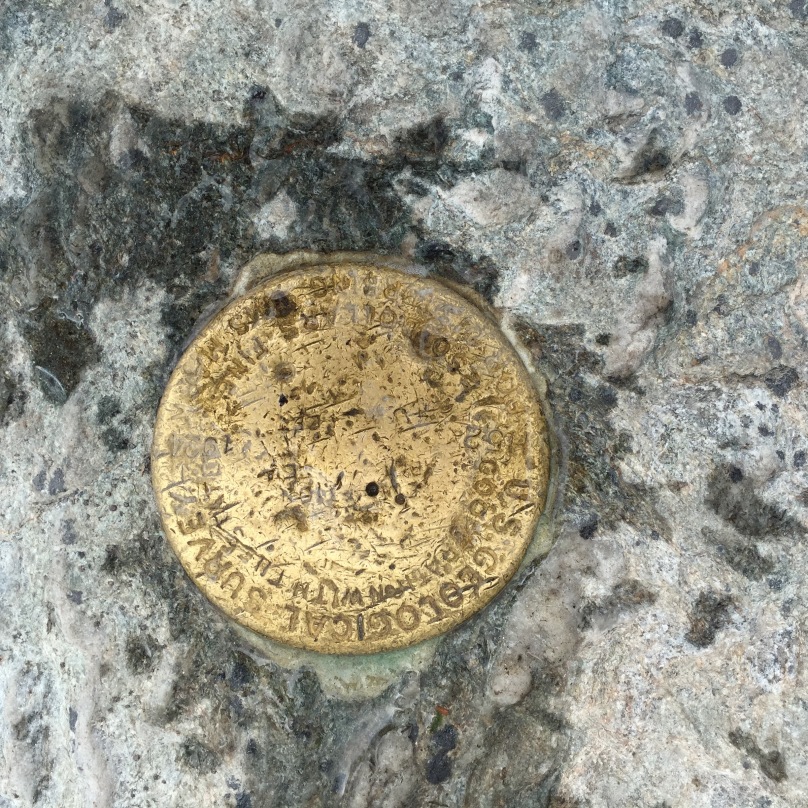 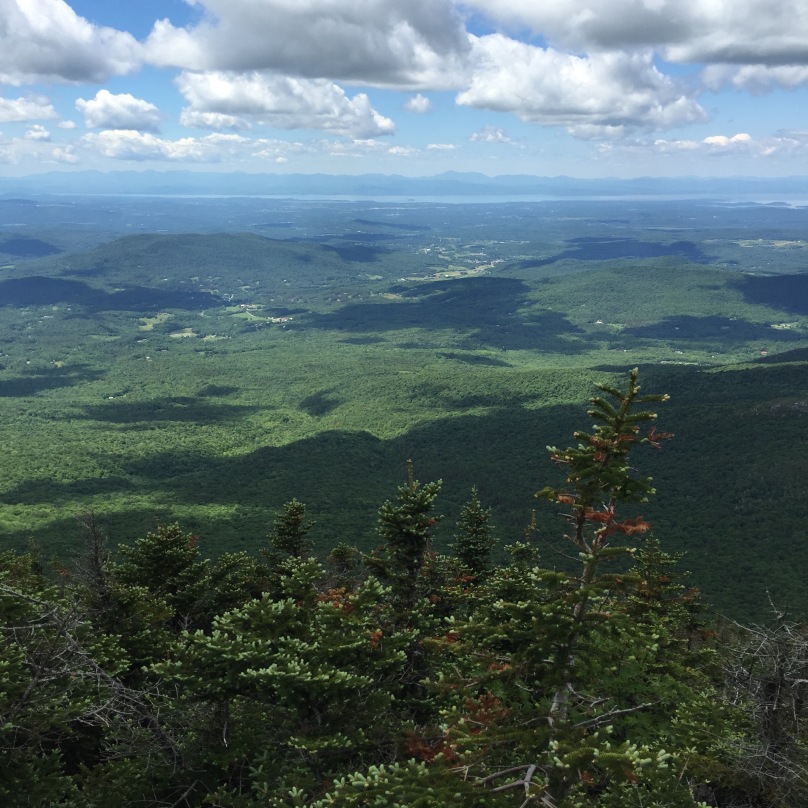 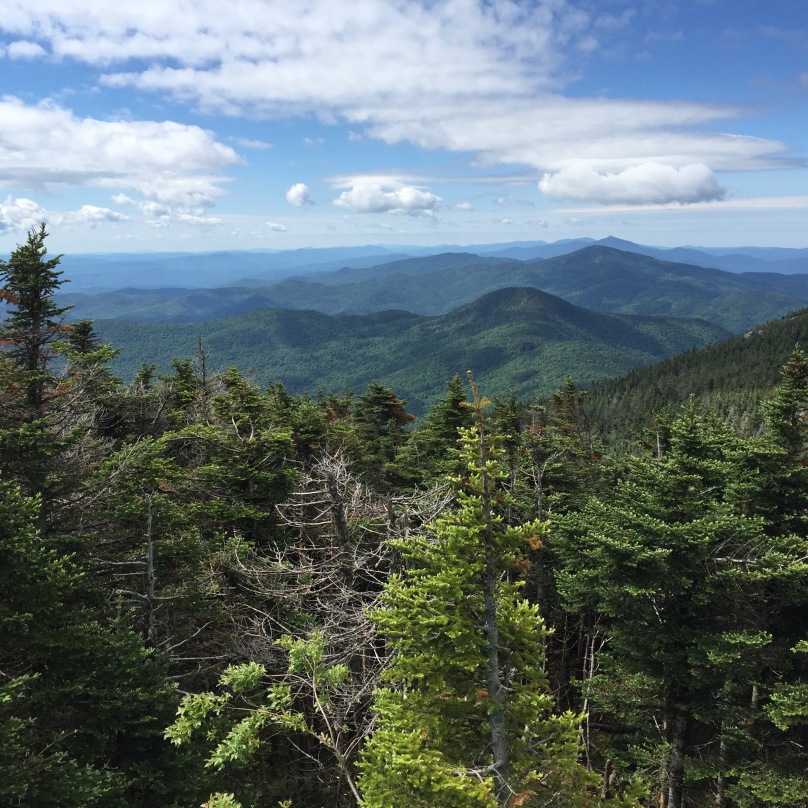 We hiked back to the car, taking 10 minutes out for a quick lunch, and then headed down the toll road and to find a beer.

Mount Mansfield is Ranked 26th of the State HP’s, at 4,393 ft above sea level.  There are several routes up to the summit including car and hiking.  Options to hike are from the West side via Undersell State Park, or the east side via the Haselton or the Long Trail.  There are other options as well, but most have  very steep scrambles which need to be considered.   Our original plan was to hike the Long Trail to the Haselton Trail that would have been a distance of about 6.5 miles and an elevation gain of 2,000 ft.  However, I cannot report on this trail, with the exception of the 1.2 miles from the Nose to the Chin and back.  That portion was well marked and included hopping from rock to rock (weak knees do not like this hike).

After finding a satisfying beer, we went on to the Ben and Jerry’s ice cream factory, The Cheese Store, the local Organic grocery store and the local distillery tasting room to sample some fine Vodka, rum and whiskey.  It ended up being a very enjoyable day with great weather.  By the way, the weather on Mount Washington was also pleasant.

This marks number 7 & 8 of this trips high points.  Next up, and last post in this series, is Mount Katahdin.  Happy Trails

2 thoughts on “The High Point Trip: Vermont and New Hampshire”