It has been a long time since I had the opportunity to go hiking with Kerry and Jason –  2017 was too busy.  Therefore, when things started looking good for a hike this year I jumped on the chance.  We set our sights on the Dakotas, pinned down and booked dates, and started planning.  We bagged 2 Highpoints, and for me White Butte ND was #24 and Black Elk Peak, SD was #25.  This post will cover our first day in North Dakota.

We flew into and out of Bismark, ND – a “reasonably” priced airport when compared to Rapid City, SD.  I landed separately from my two friends but managed to find them as there are all of 6 gates at the airport.  Kerry snagged a Yukon at the rental agency, and headed toward our first destination:  Theodore Roosevelt National Park.   As we drove through ND, we saw fields, a lot of fields, and not a lot else.  The most bustle we saw was passing through Dickinson where the recent oil boom has created a big town.  We were amused by the flatness, the cattle, and by watching our phones gain an hour as we crossed from Central to Mountain time.

Our first stop was the Painted Canyon Visitor Center of Theodore Roosevelt National Park (TRNP).  And were stunned by the beauty.  It is not just a complete change in scenery, it is a vista of changing colors as you look down into canyons of rolling hills where nothing is flat and nothing is plain.

Buffalo in the grassland of Theodore Roosevelt National Park

Painted Canyon Visitor Center, which is open seasonally, is a large visitor center with lots of gifts and loads of information.  While there is a great nature trail there, we breezed through and continued on to the town of Medora, where the official entry to the park is located.   There we were stopped in a long line of cars due to road construction.  The first 3 or 4 miles of road is under heavy construction and is down to one lane which can only be traversed by following a lead car.  Eventually we started into the park, paying the $30/car entrance fee.  Once we were past the road work, we turned right at the first intersection to see one of the Prairie Dog Towns.  These guys are so cute that you can’t help but jump out of the car to see them.  They bop in and out of their holes while calling to one another, which provided almost endless amusement.

After a good 15 minutes cooing at the “dogs” we started off on the Southern Unit Loop, in a counter clockwise direction.  TRNP is actually three areas: The remote Northern unit, the largest Southern Unit, and the Elkhorn Ranch Unit.  We only had time to drive Southern Unit’s 36 mile scenic loop Drive.  There are a lot of hiking options in this park.  While we did not have time to take a +6 miler, we were able to hop out for short jaunts.  Luckily for us, fall was coming a bit early to TRNP. 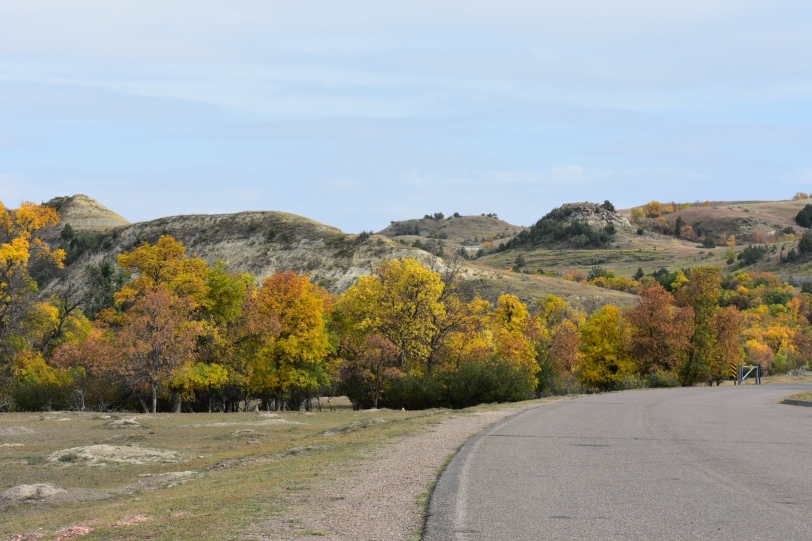 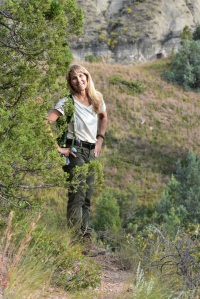 The first trail we hiked was the 0.6 mile round trip (out and back) Ridgeline Trail – which started straight uphill, and provided some great views.

We also drove to and hiked the Coal Vein Trail, which is 0.8 miles of a slight loop. On this trail we saw the layers of earth that make up this area.   After that we climbed 0.2 miles to Buck Hill, the highpoint of the park. 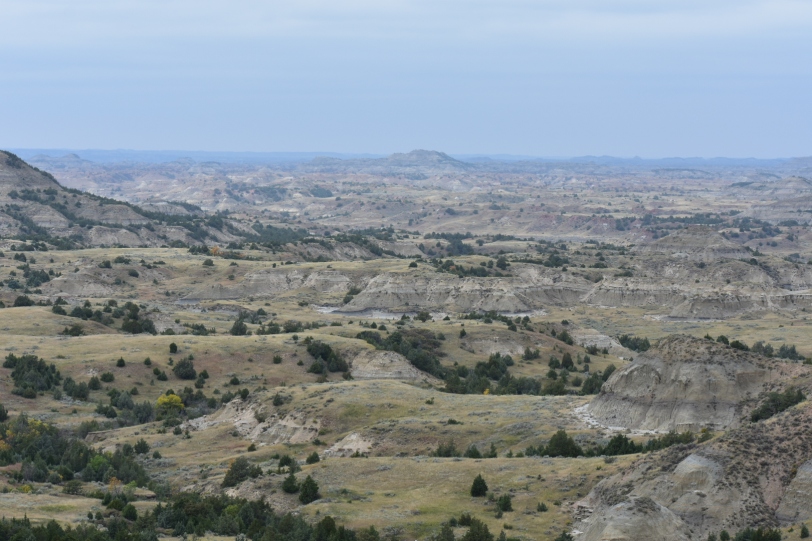 Next was the Boicourt Overlook Trail (0.4 miles RT) where they say you can still see the coal “smoking” as one vein has been on fire for a long time.  But we didn’t see any smoke. 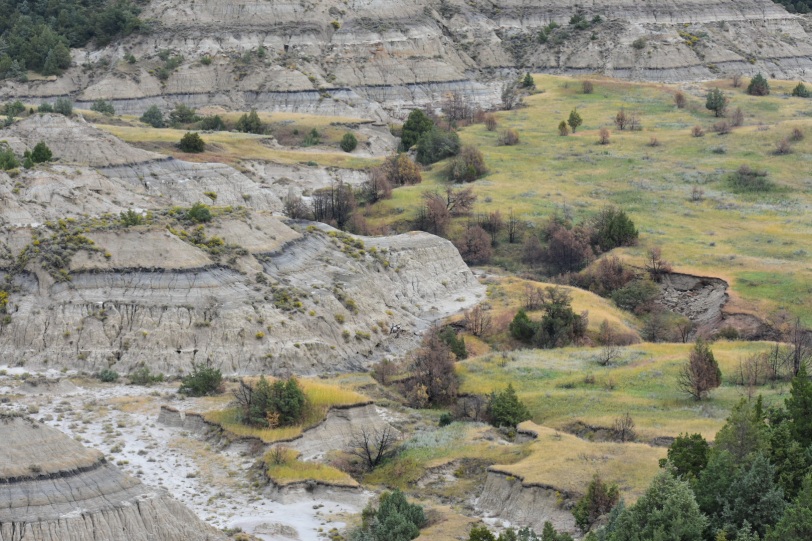 After that we took a turn and drove right up to the wild horses.  We also started to see a lot of Bison, but never any Elk. 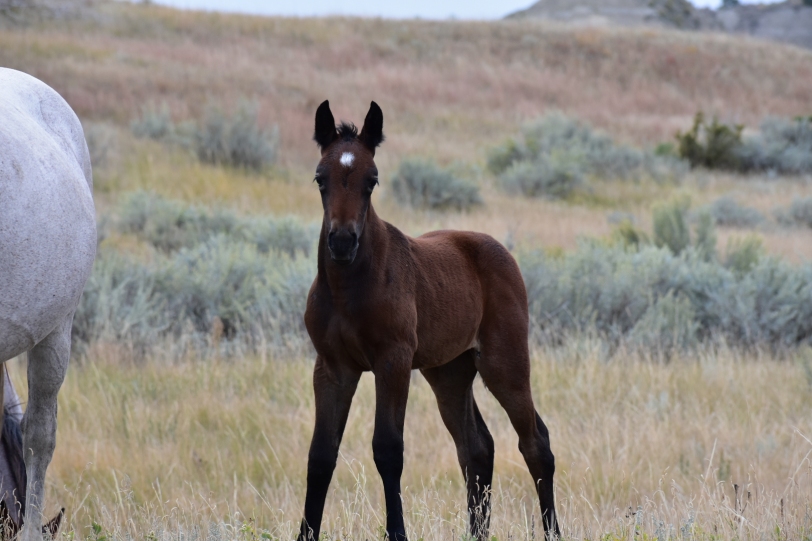 They call these the “Badlands” of ND – which seems like a misnomer since these lands don’t seem bad at all.  Our last hike was the 0.4 mile Wind Canyon Trail, where we were treated to views of the Little Missouri River. 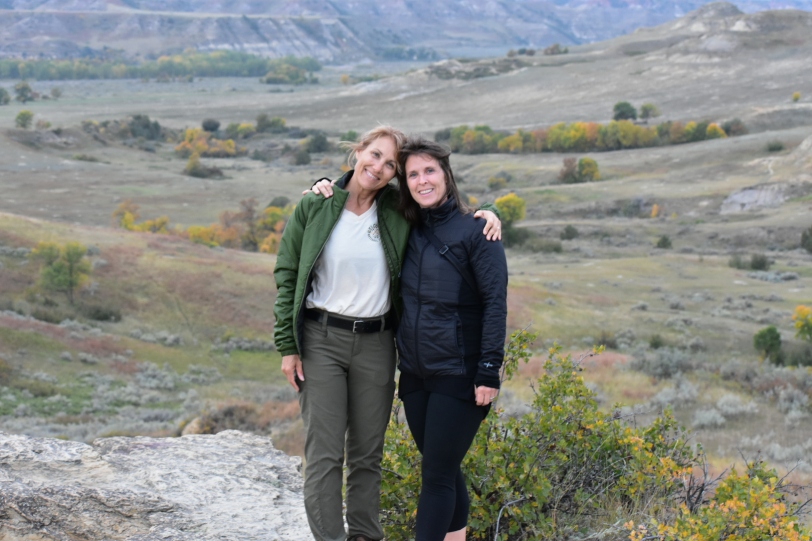 My plan was to leave the park by 5:30 or 6 pm, but with traffic delays and the sheer beauty of the park, we drove out of the park and into Medora at about 7 pm, the same time the sun was setting.

In closing I just have to mention a few things about Medora.  Medora is not only the gateway to the park, but holds a museum, many gift shops and eateries, and puts on the Medora Musical – a cowboy opry about the town.  Despite the town’s overly touristy demeanor, I would have loved to spend a day here.  However, if you happen to arrive more than a week after Labor Day (which we did), Medora is a ghost town.  Only 2 restaurants in town were open for dinner.  Boot’s Bar & Grill was a happening spot and the beer was great.  After a round of burgers we checked into our hotel and settled for the night.

p.s.  For the first time ever we left our schedules a bit open and looked for last minute deals on hotels.  We stayed at run of the mill hotels, none of which I’m going to review or even mention.  But I will say this – add some travel apps to your phone before you travel and you too can be bold and try to grab last minute deals – which often time are better than what the hotel can offer you as you are standing in their lobby.